There’s a fascinating clip at MEMRI which is a translation of an Al Jazeera report regarding a report by the United States Commission on International Religious Freedoms.

The USCIRF report uncovers educational material promoting religious intolerance and even violence, which is part of the curriculum of the Islamic Saudi Academy in Virginia.

Notice in the Al Jazeera piece the use of emotive language, the shots of children, insinuations without actually spelling them out, and the rhetorical question at the end.

Yet all the while the central issue remains unaddressed– that is the material promoting violence and religious intolerance. Notice there is not a single shot of these textbooks. (In fact the State Department hasn’t even let the Commission gain access to all of them).

This of course raises the question– why doesn’t Al Jazeera show the books that are the source of the controversy and let viewers make up their own minds?

If children are being taught, for example, that it’s legitimate to kill “apostates,” then at least let the viewers see this and decide for themselves if this is acceptable.

Instead of reporting that the USCIRF is alleging that the Islamic Saudi Agency is using inciteful material, why not let us see it? This would settle the issue once and for all.

Once again Al Jazeera has shunned a difficult issue and taken the easy route of indignation, self-pity and victimization.

Another bizarre element in this report is teacher Kate Schneider’s insistence that the USCIRF’s report is false. The report is based on an analysis of 17 of the school’s Arabic-language textbooks, yet she’s speaking to Jazeera in English and has to be dubbed. So how can she even know what these textbooks contain?

The Commission isn’t violating religious freedom, as alleged in this Al Jazeera report, but is in fact point out specific instances of incitement to violence.

The most problematic texts involve passages that are not directly from the Koran but rather contain the Saudi government’s particular interpretation of Koranic and other Islamic texts. Some passages clearly exhort the readers to commit acts of violence, as can be seen in the following two examples:

• In a twelfth-grade Tafsir (Koranic interpretation) textbook, the authors state that it is permissible for a Muslim to kill an apostate (a convert from Islam), an adulterer, or someone who has murdered a believer intentionally: “He (praised is He) prohibits killing the soul that God has forbidden (to kill) unless for just cause…” Just cause is then defined in the text as “unbelief after belief, adultery, and killing an inviolable believer intentionally.” (Tafsir, Arabic/Sharia, 123)

• A twelfth-grade Tawhid (monotheism) textbook states that “[m]ajor polytheism makes blood and wealth permissible,” which in Islamic legal terms means that a Muslim can take the life and property of someone believed to be guilty of this alleged transgression with impunity. (Tawhid, Arabic/Sharia, 15) Under the Saudi interpretation of Islam, “major polytheists” include Shi’a and Sufi Muslims, who visit the shrines of their saints to ask for intercession with God on their behalf, as well as Christians, Jews, Hindus, and Buddhists.

Here’s more of what the textbooks say regarding other religions:

• “Today, Qadyanis [Ahmadis] are one of the greatest strongholds for spreading aberration, deviation, and heresy in the name of religion, even from within Islamic countries. Thus, the Qadyani [Ahmadi] movement has become a force of destruction and internal corruption today in the Islamic world…” (“Aspects of Muslim Political and Cultural History,” Eleventh Grade, Administrative/Social Track, Sharia/Arabic Track, 99)

• “It [Baha’ism] is one of the destructive esoteric sects in the modern age… It has become clear that Babism [the precursor to Baha’ism], Baha’ism, and Qadyanism [Ahmadism] represent wayward forces inside the Islamic world that seek to strike it from within and weaken it. They are colonial pillars in our Islamic countries and among the true obstacles to a renaissance.” (“Aspects of Muslim Political and Cultural History,” Eleventh Grade, 99-100)

• “The cause of the discord: The Jews conspired against Islam and its people. A sly, wicked person who sinfully and deceitfully professed Islam infiltrated (the Muslims). He was ‘Abd Allah b. Saba’ (from the Jews of Yemen). [___]* began spewing his malice and venom against the third of the Rightly-Guided Caliphs, ‘Uthman (may God be pleased with him), and falsely accused him.” (Tawhid, Administrative/Social Sciences Track, 67)
(*The word or words here were obscured by correction fluid.)

• Sunni Muslims are told to “shun those who are extreme regarding the People of the House (Muhammad’s family) and who claim infallibility for them.” (Tawhid, Arabic/Sharia 82; Tawhid, Administrative/Social Sciences Track, 65) This would include all Shi’a Muslims, for whom the doctrine of infallibility is a cardinal principle.

What’s also sinister is the stuff which is implied. The principal of the boys’ school states, “This suggests that the commission has a certain agenda, which it is trying to implement.” But he doesn’t say what this agenda is, nor is he even asked by the Jazeera reporter.

Arabic is a language which uses insinuation and references a lot of the time. Speaking directly and to the point is considered very uncouth and rude. Now I can’t speak for the whole Arab world, but I do know in Syria if you combine the words “America” and “specific agenda”– especially regarding anything deemed critical of the Arab and Islamic world– this is how it’s perceived by most people: 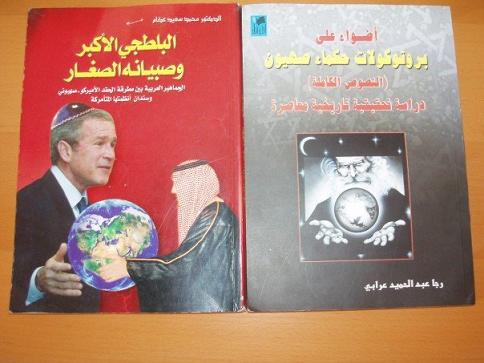 A lot of people in Syria I spoke to believe the Franklin Prophecy is real, and indeed has been fulfilled. They truly believe the Jews run America.

Here’s a poster adorning a bookstore in downtown Damascus: 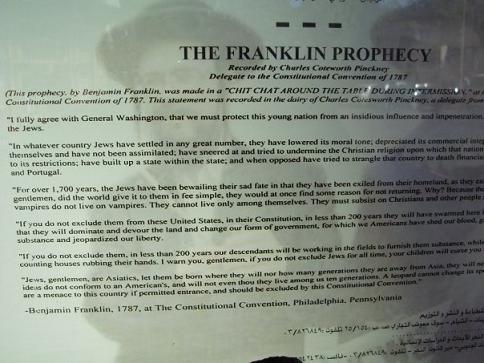 Al Jazeera is one of the most popular news stations in the Arab world because it knows its audience and tells them exactly what they want to hear.

For the most part in the Arab world any form of critical analysis is regarded as a threat which endangers its very existence and thus is not tolerated. In fact that’s one of the main stumbling blocks to learning the language.

In the end it’s just a language, and like all languages it’s nothing more than a verbal way of classifying the world into who, what, when, how and why. The rest? That’s mainly adjectives and idioms.

However if how and why are regarded as off-limits and not to be addressed then it becomes very difficult to get competent in the language, and you need a level of tenacity bordering on obsession to get there.

Believe me, not a day goes by where I don’t look to the heavens and thank whatever deity is up there that I learned Arabic from a Kurd. With him everything was on the table and could be discussed, queried and analyzed without feeling like I had run head-first into a brick wall of indignation or denial.

One of the few media outlets in the Arab world where you can occasionally take a break from the self-pity and victim mentality is Al Arabiya, specifically the programme “Lights.”

Of course nobody needs to point out the irony that its main shareholder is the same organization that funds the Islamic Academy in Virginia, the Saudi Government.

In the Middle East, you have to make do with the tools available rather than wait for everything to be perfect. You’ll be waiting a very long time.

Notice the contrast in the message conveyed here, compared to the Jazeera report. Here is Saudi anthropologist Sa’d Al-Sowayan talking about how the educational establishments are deficient and how the Arab/Islamic world needs to come to terms with modernity and accept critical analysis.

You rarely hear this sort of view on Jazeera, which is one of the reasons I stopped watching it when I was in Damascus.