It features the American and Vietnamese flags next to each other, a photo of the smiling and waving prime minister, and a letter from His Excellency, in which he says:

Today, Viet Nam is known as a peaceful and stable country with a dynamic market economy. The country has intensely focused on extensively integrating into the global economy, promoting its renewal cause and creating the most favourable conditions for domestic and foreign businesses and investors, including those from the United States.

In gratitude for which, apparently, the following appears at the bottom of the page: 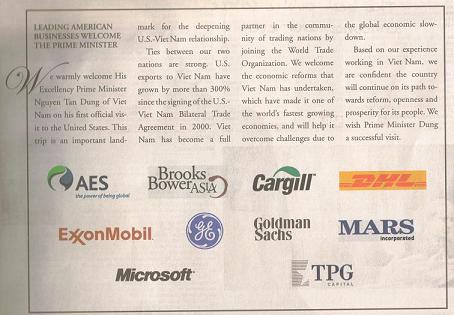 Now I don’t begrudge the Vietnamese Communists their victory over the US in the previous century’s war, nor do I begrudge them their “dynamic market economy.” But as a social democrat, I am concerned about the lack of freedom for Vietnam’s workers to organize independent trade unions.

Workers are not free to organise or join unions of their choosing. Any union formed must be approved by and affiliate with the [government-controlled Vietnam General Confederation of Labour], and operate under its umbrella.
…..
According to the Trade Union Law, individual unions are only able to affiliate with, join, or participate in international labour bodies “in conformity with their activity objectives.” Those “objectives” are determined by the national VGCL, giving it effective power to prevent international contacts or affiliations of which it does not approve.

Despite the restrictions on strike action, many strikes do take place without all the procedures respected, and are tolerated by the authorities. A total of 201 strikes took place between December 2005 and March 2006.Most concerned pay disputes.

Virtually all observers stated that the strikes began without prior consultation with the VGCL or its local unions, and most continued without the union’s leadership.

The strike actions had an effect, as the government approved an approximately 40 per cent hike in the minimum wage for workers at foreign-owned enterprises, effective on 1 February 2006.

This resulted in a remarkable response from the organization representing European companies doing business in Vietnam:

The European Chamber of Commerce (ECC) wrote in January [2007] to the Vietnamese Prime Minister to advocate the government take action to restrain the strikes. Implicitly threatening that foreign investment could be adversely affected, the ECC told the Prime Minister that one of Vietnam’s attractions as an investment destination was “the fact that the workforce is not prone to industrial action”. He also protested that the businesses affected were not consulted before the government unilaterally raised the minimum wage, as did the American Chamber of Commerce, senior officials in the Ministry of Foreign Affairs in Taiwan and the Japan Business Federation Chairman.

Judging from The Washington Post ad, however, relations between the corporations and the Socialist Republic have been smoothed over for the time being.