In a recent post about paleoconservative Pat Buchanan’s latest book– about Churchill, Hitler and World War II– I noted with some puzzlement his opinion that a hands-off policy by Britain and the US toward Hitler’s aggression in eastern Europe could have prevented the Holocaust.

[G]iven that the vast majority of Europe’s Jews were in Germany and the East, I don’t see what would have stopped it.

Although I suppose Buchanan’s book offers a more thorough explanation, here is what he wrote in response to a review by Christopher Hitchens, who said the book “stinks.”

Not until midwinter 1942 was the Wannsee Conference held, where the Final Solution was on the table.

That conference was not convened until Hitler had been halted in Russia, was at war with America and sensed doom was inevitable. Then the trains began to roll.

And why did Hitler invade Russia? This writer quotes Hitler 10 times as saying that only by knocking out Russia could he convince Britain it could not win and must end the war.

If I’m reading this… correctly, it was the British who caused the Holocaust.

And it should come as no surprise that Buchanan’s book got a positive review at Counterpunch from Paul Craig Roberts, an assistant secretary of the Treasury during the Reagan administration.

Myself, I prefer Daffy Duck’s approach to dealing with the Fuhrer: 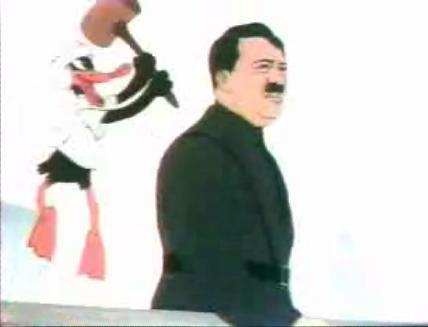