I’ve always thought of the animated movie “Chicken Run” as vaguely leftwing, emphasizing as it does the importance of organization and cooperation as opposed to go-it-alone individualism.

But now I learn from Iranian TV that it’s actually a crafty tool for Zionist propoganda. As the presenter helpfully explains:

Unfortunately, Zionist notions can be detected in children’s movies, from the days of Walt Disney and to TV animation films. The Zionists’ exclusive investments in group specializing in children’s films, such as DreamWorks in the 1990’s, and the appearance of various works like “Chicken Run,” which employed magnificent techniques, were part of their premeditated plan to cover the blood stains soiling the clothes of the occupiers of the lands of Lebanon and the Gaza Strip. 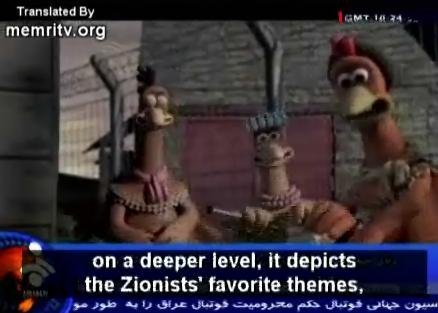 And an Iranian film critic says:

In “Chicken Run,” for example, you find allusions to the Holocaust, to concentration camps, and to the concept of awaiting a hero or a savior.

Aside from the ultimate fate of the chickens, I thought the allusions in “Chicken Run” were more to a German POW camp than a concentration camp– the references to “The Great Escape” were hard to miss.