I liked this paragraph from The Washington Post’s obituary of writer Eliot Asinof, who wrote the book “Eight Men Out” about the fixing by gamblers of the 1919 baseball World Series, and who co-wrote the excellent 1988 movie of the same name with director John Sayles:

[Asinof] ran into trouble while working on a Western movie. He wrote a scene that required John Wayne to punch a horse in the nose — his son noted that Mr. Asinof had never been on a horse himself — and the scene offended Warner Bros. head Jack Warner. “Duke would never hit a horse,” Warner exploded. “You’ll never work in this town again,” the mogul told Mr. Asinof, who decamped to New York.

A rather harsh reaction from Mr. Warner, I think. I could picture John Wayne punching his horse in frustration– but then feeling bad about it and apologizing in that gruff way of his.

And it turns out that punching horses in the nose is historically precedented– or so this statue in Vienna would suggest. Maybe that’s where Asinof got the idea. 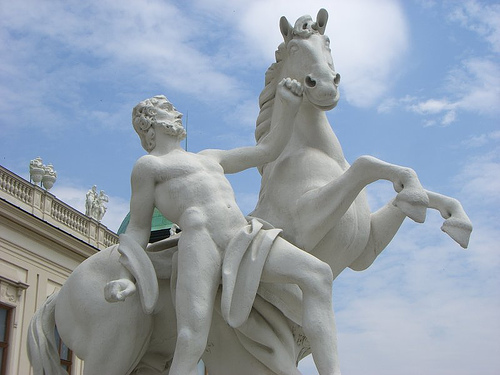 Has anyone ever punched a horse or been fired with the words, “You’ll never work in this [town/business/field] again?”

Update: Someone punches a horse in the nose in “Blazing Saddles.”