“Terrorism Is Not Jihad” says Sheila Musaji at the American Muslim website. Quite right.

The U.S. Government recently issued a statement asking that government officials be cautious in their use of language as it may actually be against the interests of the U.S. to use terms that connect the religion of Islam with the acts of criminals.  The governments suggests the use of more accurate and non-inflammatory language.  A recent Homeland Security Report even sharply rebukedJohn McCain’s ‘Islamic Extremism’ rhetoric.  Of course, Islamophobes like Robert Spencer and Hugh Fitzgerald don’t approve, but they also thought Islamo Fascism Awareness Week was a good idea.

The governments new awareness that words have meaning has been attacked as caving in to Muslim pressure by a number of groups and individuals who currently make a nice living defining Islam and Muslims.  As an American Muslim who loves both Islam and America, I say “Thank God Someone Is Finally Listening to Us – Terrorism Is Not Jihad”.  Perhaps now we can work together to combat the very real problem of extremism and terrorism.

Strolling down Bethnal Green road yesterday, I spotted this graffiti on a public telephone box: 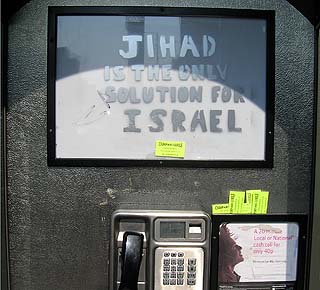 Clearly the public are also getting their perception that ‘Jihad = Terrorism’ from sources other than Robert Spencer and his ilk. Wannabe Jihadees are in fact full partners in the dangerous “clash of civilisations” narrative. This is something Musaji readily acknowledges:

Criminal political movements like al-Qaeda who attempt to convince other Muslims that their actions are somehow “Islamic” attempt to call their terrorist acts Jihad, and when their false claims are echoed in the media in the West, that adds some legitimacy to their claims, at least for uneducated Muslims.

Were it only the case that the numskulls at the CPS were this perceptive. The hate-and-violence preaching clerics exposed by Channel 4’s Undercover Mosque are fully complicit in the growing fear of Islam. Fools like Islamophobia-Watch (who ironically praise Sheila Musaji’s article) happily peddled the absurdity that Dispatches aided the BNP in their incitements to anti-Muslim bigotry, while being blind to the fact that these Imams-of-hate and the BNP thugs are actually the ones cut from the same cloth.

It is good that when the far-right say “Jihad = Terrorism”, Sheila Musaji is ready not only to answer them, but willing to point the finger at those Muslims who agree.