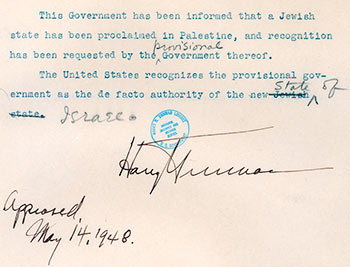 Writing in The Washington Post on Israel’s 60th anniversary, Richard Holbrooke tells about President Harry Truman’s decision to recognize the new state minutes after it declared its independence on May 14, 1948.

Holbrooke bases his account on interviews with Clark Clifford, an aide to Truman and an advocate of immediate recognition. He reminds us once again that by recognizing Israel, Truman rejected the urgings of virtually all his top foreign-policy and defense officials– most notably Secretary of State George C. Marshall. Marshall, in fact, told Truman that if the president followed Clifford’s advice, he (Marshall) would vote against Truman in the November 1948 election.

Beneath the surface lay unspoken but real anti-Semitism on the part of some (but not all) policymakers. The position of those opposing recognition was simple — oil, numbers and history. “There are thirty million Arabs on one side and about 600,000 Jews on the other,” Defense Secretary Forrestal told Clifford. “Why don’t you face up to the realities?”

The website of the Truman Library has some history and documents relating to the US recognition of Israel.

In an October 1947 memorandum, the Joint Chiefs of Staff argued that the partition of Palestine into Jewish and Arab states would enable the Soviet Union to replace the United States and Great Britain in the region and would endanger United States access to Middle East oil.

“You win, you baldheaded son-of-a-bitch. I will see him,” the plain-spoken Truman said.

Update: Undoubtedly Truman’s decision to recognize Israel was in part an effort to secure the support of American Jewish voters in the closely-fought 1948 presidential election. But he sometimes expressed exasperation with the pressure he received on the issue. He wrote in October 1947: “I received about 35,000 pieces of mail and propaganda from the Jews in this country while this matter [the issue of the partition of Palestine, which was being considered by the United Nations Special Committee on Palestine from May 13, 1947 to August 31, 1947] was pending. I put it all in a pile and struck a match to it — I never looked at a single one of the letters…”