Interviewer: As an intellectual, are you ready to accept that intellectuals are placed on trial?

Interviewer: What if someone is not a pan-Arab Nasserist? He refuses to believe in this theory, because the past decades have proven it to be merely empty slogans.

Riyad Na’san al-Agha: Fine, he can write an article. For the past seven years, in newspapers and on the Internet, they write about us things that bring to mind Yediot Aharonot and Haaretz, yet we did not throw anyone in jail. Some of them even went to the U.S. in order to curse us from there, and when they returned to Syria, nobody interrogated them at the airport. But they must not take any action. If they do, we will throw them in jail. [My italics] I’m sorry that I’ve transformed from an intellectual into a governmental official. I will throw him in jail not because I am a minister, but because I fear for my nation because of these people, who are happy when they meet with a Mossad officer, even when Gaza is trampled under enemy shoes. ….

…They can say what they want, but if they act, they will be punished. They can curse or make statements, but if they become tantamount to a secret squad, which assassinates a great citizen, a hero, a martyrdom-seeker, like Mughniya… The person who killed him relies on an ideological group.

This is completely false; you cannot write what you want. Syrians such as Mohammed Ghanem and Michael Kilo have been arrested for writing articles that allegedly “weaken national sentiment” and “spread false or exaggerated news that can affect the standing of the state,” in breach the State of Emergency that has been in place since 1963.

What the al-Agha interview does bring to light is that there are a few, albeit limited and tightly-controlled, opportunities in Syria to express opinions and let off stream.

It is known in Arabic as “breathing”.

While the regime is oppressive, it’s not naïve. It recognises that unlike, say, Saddam’s Iraq, it cannot totally eliminate the civil society.

With this in mind, every so often it needs to open a safety valve to prevent a buildup of tension and to let people “breathe” for a moment. And as long as they stay within the red lines they stay out of prison.

When I was in Syria I noticed there were a few opportunities for people to “breathe”. One was by going to see comedian Hamam Hout. 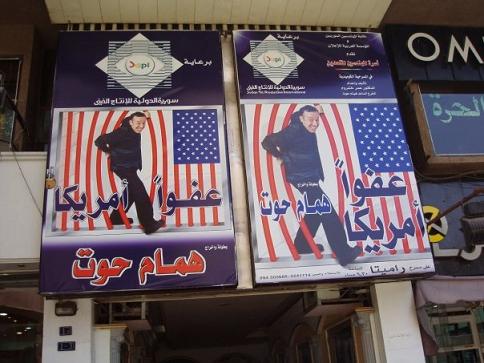 His stage shows provide Syrians a space where they can hear someone say what’s normally forbidden.

I remember watching Al Arabiya showing a clip of his latest show where he stood on stage and shouted “Abdul Halim Khaddam”, the name of Syria’s exiled former vice president.

At that moment I heard gasps of shock from the audience; then a moment later when they realized it was OK to do so, they started laughing uncontrollably.

In the interview afterwards with Al Arabiya, Hamam Hout was at pains to display his loyalty to the regime.

The other more popular way people liked to let off stream was by watching the TV comedy show “Spotlight”. This is as close to satirizing the authorities as you can get.

In one sketch there are people queuing up for visas outside the Norwegian embassy. Suddenly a high-ranking Ba’athist arrives (the sunglasses, black suit, and black Mercedes are the give away). The people know who he is but won’t say his name out loud. Then… well see for yourselves how they react around him.

Half-way though the sketch he shouts at the people, after getting them to queue up in an orderly fashion: “Shame on you! Shame on you! We are outside a foreign embassy! What do I say to those people? We are chaotic? We don’t like order!? Shame!”

This is a pun, as it also translates as: “Shame on you! We are outside a foreign embassy. What do I say to those people? We are chaotic? We don’t like the regime? [i.e. we want to get the hell out of the country?] Shame!”

Another example of this type of satire is this sketch, “The People’s Choice”, which plays on the fact that in Arabic “choice” and “cucumber” are the same word.

Two chefs are having a conversation along the lines of “What choices/cucumbers are available to people here?” and the punch line is “The people don’t have a choice”.

It may not appear funny here. But in a Ba’athist dictatorship, you’ll take whatever irony and satire is on offer. As they say, beggars can’t be choosers.

Just to illustrate the limits of what’s permitted in Syria – compare “Spotlight” with its Lebanese equivalent, LBC’s “A Smile for the Nation”, a play on words that also means “the nation’s just died” (this sketch is subtitled in English).

(It was only shown once and expunged from the archives after Hizbullah supporters rioted in response.)

Now some foreigners and Middle East “experts” may interpret Syrian satirical programmes as an indication of some sort of openness. But at the end of the day every Syrian knows it is in fact the opposite– this is regime maintenance, where words provide a substitute for action.

Normally Walid Junblatt is to principles what Paris Hilton is to intelligence, but half way though this clip he makes a very good point about the nature of Syrian rule.

As time passes I’ve noticed the regime is getting more and more repressive. Syrian Minister of Culture Riyad Na’san al-Agha is a liar; people are imprisoned for what they write, not for what they do. Just ask Michael Kilo.

Epilogue: Subsequently I heard that Syria was no longer making new episodes of “Spotlight”. Nobody would tell me why but the consensus was that the TV show had crossed too many red lines.