The lead item on Newsnight last night was Castro’s departure. I was one of the studio guests debating the issue. The others were a Cuban-American activist, Frank Calzone; a pro-Castro Cuban journalist, Pedro Perez-Sarduy; and, inevitably, George Galloway. You can watch the programme on the Newsnight website till tomorrow’s edition replaces it, though I’m not sure I’d recommend it. At one point Galloway advanced an unusually labyrinthine “Bush-Hitler” analogy, and I regret that my sniggering off-camera was clearly caught by the microphone. In the circumstances, I asked Mr Galloway not to make me laugh as he was the one with a record as long as my arm of justifying autocracy across the globe

By contrast, here’s the reaction of the Professor of Social and Political Philosophy at the Department of Philosophy, the Head of the School of Arts at the University of Bristol, monarchist, and all-round buffoon, Chris Bertram:

And, of course, Castro ran a dictatorship that has, since 1959, committed its fair share of crimes, repressions, denials of democratic rights etc. Still, I’m reminded of A.J.P. Taylor writing somewhere or other (reference please, dear readers?) that what the capitalists and their lackeys really really hated about Soviet Russia was not its tyrannical nature but the fact that there was a whole chunk of the earth’s surface where they were no longer able to operate.
…
Let’s hear it for Elian Gonzalez. Let’s hear it for 49 years of defiance in the face of the US blockade. Hasta la victoria siempre! Long Live King Raoul

(I may have added the bit about King Raoul)

Here’s a picture of some ungrateful Cubans, who unaccountably prefer shark-infested waters to the paradise that was Castro’s Cuba 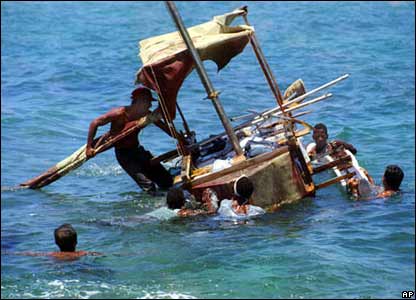 Also worth reading is David Osler.