Well, that’s three of them potted, so far.

Their lying defence – that the 21/7 bombs were fakes, and were designed never to go off – was disbelieved by the jury.

I can’t begin to tell you what I feel about these scum, who sought to murder without limit.

But, oh, the contrast between the self image of these jihadists and the reality!

Take Ramzi Mohammed: the man who wrote a note to his girlfriend and two children, in which he said:

“My family don’t cry for [me]. But instead rejoice in happiness and love. What I have done [is] for the sake of Allah for he loves those who fight in his sake.” … Be good Muslims … and you shall see me again in paradise, God willing.”

They saw him again, all right: 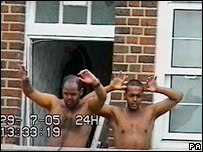 Standing on the balcony of a council flat, in his undies, shouting “I have rights, I have rights” like a common criminal.