Respect candidate, Yvonne Ridley, has been unemployed since she was booted off the Muslim Brotherhood’s Al Jazeera and then sacked by the Islam Channel: ostensibly at the request of the World Wide Zionist Conspiracy, but actually as a result of having offended a Saudi royal.

Not to worry. Yvonne has a new gig: a Lord Haw Haw style show on a new Iranian state-run TV station, aimed at the international market: 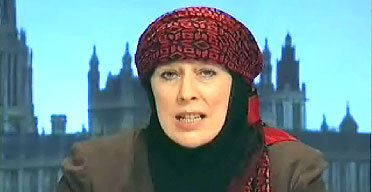 It was intended to be a radical departure in global news coverage, and few could argue that in this, at least, it succeeded. Iran’s new state-run English-language 24-hour news channel, which launched yesterday, was aimed at viewers in the US and Europe, its director said. But despite the clipped English tones of its anchorman, Henry Morton – “Salaam, and welcome” – the channel, called Press TV, still needed to learn a thing or two about western attention spans.
Much of yesterday’s airtime was occupied by long extracts from a soporifically gentle interview with Venezuela’s Hugo Chávez, and a slow-moving documentary about Russian culture. That – rather than the channel’s overtly propagandistic tone – seemed likely to prove the biggest obstacle to its success. As Fox News discovered, you do not need to worry too much about the truth, just as long as you keep your reports to 60 seconds, and use a lot of loud music.

Press TV’s website took a more forthrightly partisan approach, emulating the design of the BBC News site to an almost spooky degree, but with material to make the BBC blanch. A story about the attempted attacks on London and Glasgow airport, headlined More threadbare propaganda from the west, was a perfectly serviceable account of recent events – until the final paragraphs, where the reporter suggested they were staged by the UK government, in order to tarnish the image of Muslims enraged by the knighting of Salman Rushdie.

The website also included a “quick vote” poll – “Do you think the withdrawal of the occupation forces is the best solution to the restoration of peace in Iraq?” – but, as if to invite mockery, refused to allow users to see the results.
…
The most well-known face at the London bureau, based in Ealing, is Yvonne Ridley, the former Sunday Express journalist who converted to Islam after being captured by the Taliban in 2001.

Ridley will host a live political show called The Agenda every week. The first edition, to be broadcast tomorrow, will investigate Pakistan’s military budget.

Ridley, 48, told the Guardian she jumped at the chance to work for Press TV when approached just a few weeks ago.

She said: “I see it as an antidote to Fox TV that will give a different perspective to the coverage that you get from the mainstream media. It’s not shock TV, tabloid TV or propaganda promoting reactionaryism.”

I wonder how long it will be until she pisses off her new employers, and gets the boot.