This weeks’ riot by detainees at the Harmondsworth immigration and asylum detention centre in west London was entirely predictable, given the centre’s grossly inhumane conditions. 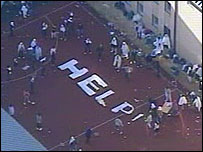 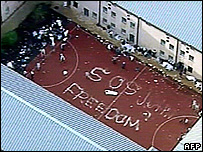 Harmondsworth is Britain’s equivalent of Guantanamo Bay – not quite as bad, but close – a shame to a supposedly civilised, democratic nation.

Many of its detainees are refugees who have committed no crime, yet they are subjected to a draconian prison-style regime and allegedly criminal abuses by rogue staff.

The Chief Inspector of Prisons, Anne Owers, issued a damning report this week, describing conditions in Harmondsworth as the worst she has ever seen in an immigration and asylum detention centre.

Her report revealed that 60% of inmates felt unsafe and 44% said they had been victimised by staff.

I can confirm, from personal contacts on the inside, everything that Anne Owers has said about Harmondsworth – and more.

During my human rights work with asylum applicants at Harmondsworth I have received persistent reports of grave human rights abuses by some staff (although, I must stress, there are some outstandingly good staff too).

If true, these allegations are so serious that criminal charges should follow against the staff concerned and against the Harmondsworth management company, Kalyx Ltd.

The allegations include claims of physical violence, sexual assault, racism, homophobic harassment and corruption by certain staff, including alleged collusion with drug dealing and extortion within the detention centre.

Criminal gangs reportedly operate inside Harmondsworth, with impunity. These are mostly convicted criminals awaiting deportation. They are free to prey on vulnerable, law-abiding asylum applicants who have committed no crime.

There are also allegations of an excessive use of punitive solitary confinement; sometimes for petty, unjustified reasons. Segregation and isolation were used in Harmondsworth as a punishment 129 times in one six-month period in 2006. It is said that on some occasions solitary has been meted out for no other reason than a detainee’s loud protests against abuses. Some staff would, it seems, prefer to silence critics rather than deal with their complaints.

These wide-ranging allegations concern criminal and imprisonable offences, which successive Home Office ministers have been alerted to, but have apparently chosen to ignore. If the allegations are proven, these ministers should be not only be sacked; they should also face criminal charges of negligence and of failing in their duty of care for allowing these human rights abuses to continue.

Harmondsworth and all Britain’s asylum detention centres are inhuman hell-holes that should be closed down. They are unfit for purpose.