Guardian columnist Catherine Bennett, who appears to be a serious student of Harry’s Place, looks into the soul of the Male Muscular Liberal Blogger and concludes that guys just wanna have guy-type fun.

I can confirm this. In the past couple of years I have had the opportunity to meet fellow Harry’s Placer Marcus and Norm Geras of normblog on their visits to Washington, DC. After drinking Budweiser at a biker bar, comparing our muscular-liberal tattoos (“Born to raise issues”) and making hilariously suggestive comments to the waitress (“Hey, baby, wanna find out how muscularly liberal I really am?”), we went outside, revved up our Harleys and raced down Pennsylvania Avenue, scattering cars and pedestrians alike.

However, Wardytron has long hair and talks like a girl.

Harry adds: I’m tempted to say I feel like I’m 19 again and being told off at NUS conference for making a complimentary reference to Neil Kinnock’s daughter but…..

Ok, she has a point about the blokey nature of a lot of blogs. And I also cringe at ‘Instawife’ type references. But I really don’t think we are the worst culprits when it comes to behind the bikesheds blogging. I mean, ok, listing favourite songs might be a man’s thing but they are hardly offensive.

And would it be ungentlemanly to point out that Catherine Bennett has some unhealthy obsessions of her own? After all, she even went to the extent of inventing a fictious newspaper columnist based on a former collegue who left the Guardian who makes a reference, either cited or hidden, to Harry’s Place nearly every week.

And that is the second time Catherine Bennett has gone into print in a national newspaper to complain about Harry’s Place posting a picture of Helena Christensen in socks. What’s that all about?

Also, David T has already pointed out my shimmering androgynous Bolanesque beauty, which is hardly compatible with being a “redneck”. Obviously I don’t claim to be representative of the rest of the blogosphere, who are of course grunting, unwashed simian oafs to a man, and who when not discussing real ale or demanding to know why “the old ball and chain” hasn’t made dinner yet – and none of that foreign rubbish this time; what do you call it, pasta? – are to be found taking apart and reassembling old motorcycles, but I for one plead Not Guilty.

This would appear to be an opportune moment to introduce myself as the latest addition to the team of writers here at Harry’s Place. My first post – What about women, eh? Phwoar!!! – will appear later today. This will be followed by a second post – Ms. Catherine Bennett: nice legs, shame about the dialectic – shortly after my eviction on Friday night.

Harry again: I feel we should provide Catherine Bennett with some viewing material but as I’m far too modest to post pictures of my own muscular liberalness she’ll have to make do with my ‘Little’ brother. 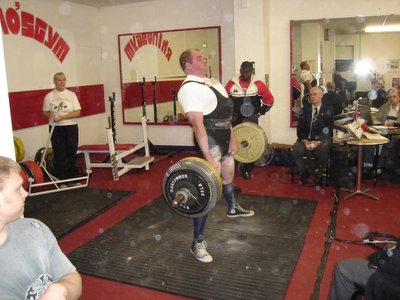