Since Saudi Arabia started acknowledging that jihadis are active against targets in the Kingdom, official policy towards militants, their clerical supporters, and their journalistic cheerleaders changed dramatically. Public enthusiasm for the brave mujahideen was high while they were busy fighting holy wars in far away Chechenia, Bosnia and Afghanistan, but gun battles and explosions closer to home draw fewer cheers, particularly among the ruling class whose position they directly and expressly threaten.

A conspicuous sign of the official shift in domestic policy was the appointment last year of a new editor in chief at Al Arabiya, the Dubai based Al Jazeera clone owned by King Fahd’s brother in law. The new editor, Abdul Rahman al-Rashed, hit the headlines in the west last September when he penned a much quoted article in the newspaper, Al-Sharq Al-Awsat, which focussed upon the prominence, nature and source of salafi jihadist terrorism. The station followed with a four part interview with Allawi, two interviews with Bush, and became vocal supporters of the Iraqi elections.

Al Arabiya’s new editorial line couldn’t be more different from that of Al Jazeera. Although it is quite wrong to paint the station as simply the mouthpiece of Al Qaeda – in fact, it embraces a diversity of political viewpoints – it is a relentless romanticiser of jihadi terrorism and the soapbox of the islamist Egyptian preacher, Qaradawi. 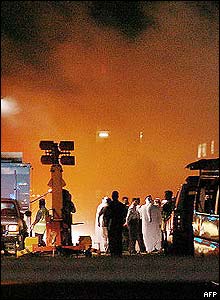 Following yesterday’s suicide bombing in Doha, carried out by an Egyptian, which injured 12 people including 6 Qataris, and killed a Brit, I wonder whether it is far fetched to see the Emir of Qatar calling time on Al Jazeera, at least in its present form. Last month, the Economist reported that the station, which is funded by the Emir of Qatar and Qatari construction companies, was in line for privatisation. A privatised Al Jazeera, the article noted, will find it hard to find funding from arab – for which, read “Saudi” – sources.

How much more difficult will its task be if its funders fear conflict on their own doorsteps?